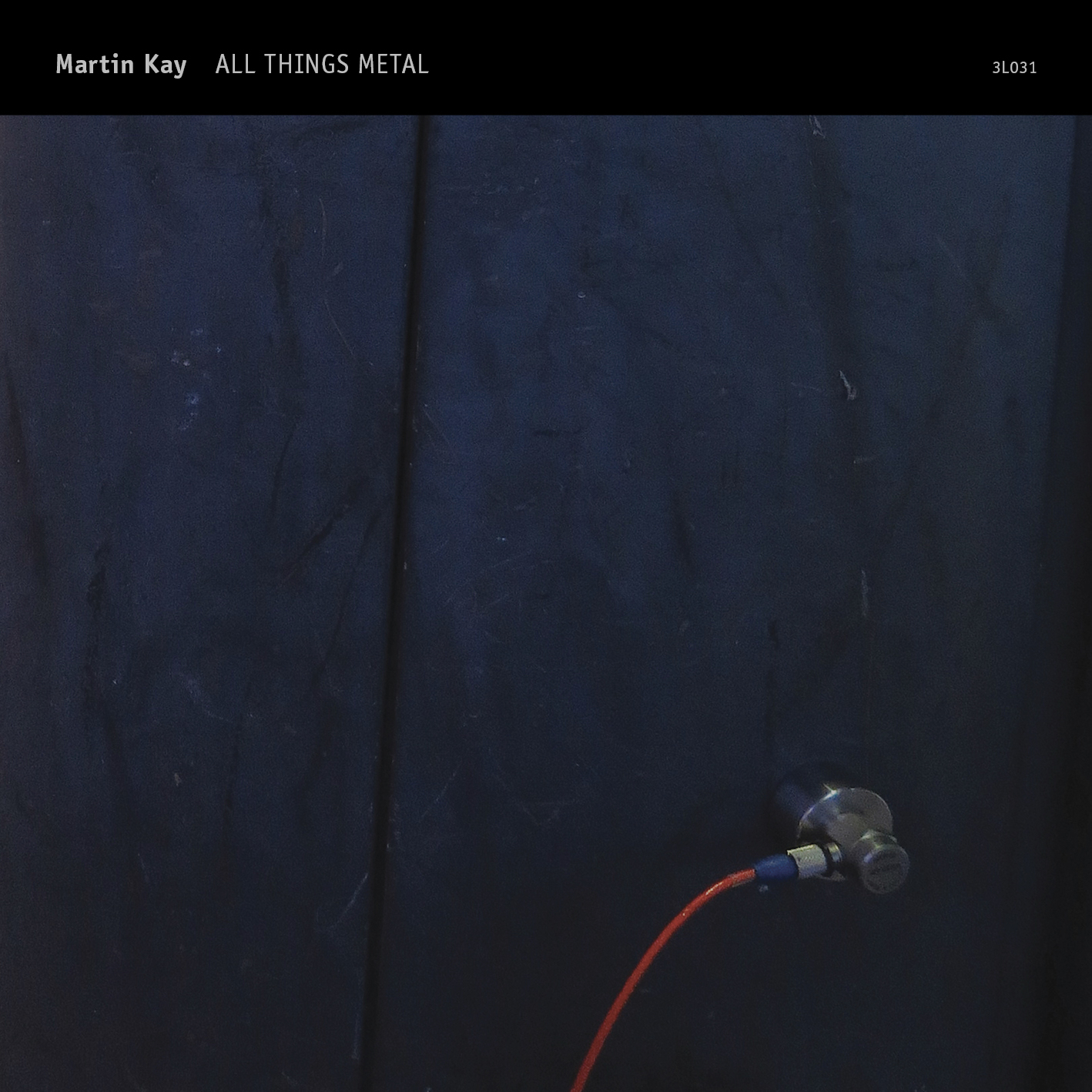 is a collection of recordings taken over a five year period of various environments and sound events captured closeup to and through an array of functioning and discarded metal infrastructure and objects. My intention for this album is to highlight the unique ability that metal possesses in abstracting, transforming and reconfiguring a given landscape — propelling the listener to reconsider their emotional and psychological connections to familiar urban environments.

VITAL WEEKLY #958
The 3Leaves label specializes in music that deals with field recordings and usually the releases have a nice package: this one too. A pro-printed booklet with information. I never heard of Martin Kay, but in the last five years he has been recording environments that deal with metal. 'My intention for this album is to highlight the unique ability that metal possesses un abstracting, transforming and reconfiguring a given landscape - propelling the listener to reconsider their emotional and psychological connections to familiar urban environments', he writes in the booklet. In the first piece he uses two omni-directional microphones in an old Soviet oil tank picking up the vibrations from beyond, traffic, wind, construction site and debris. All of that together brings us a piece of music that is dark, atmospheric, drone like and intense. This perfectly tells us what Kay does: record sound through the use of metal, acting as a resonator or filter to other sounds. Put a microphone beneath a metal sheet and record the rain pouring on the metal plate, such in 'Rain On Iron Gutter'. It's probably one of those listening experiences you once (or more of course) had but simply couldn't record properly. Or when you did and it didn't sound like this. Martin Kay may have the right equipment, but also the right amount of patience to capture his sounds. The twelve pieces here are all great: excellent listening experiences. It's not an album of heavy metal, or an album of some rhythmic banging on metal sheets, but sometimes a very quiet and introspective sounding of the world, and sometimes droning heavily away in a pitch black sea. Kay offers an excellent variety in these pieces and makes up, in its entirety, a great album. (FdW)

MUSIQUEMACHINE
As this releases title suggest it features purely field recordings made in & around metal objects. Over a five year period this Australian sound artists, field recordist, & designer visited various different places & environments around the world to capture the twelve tracks on offer here.

When one thinks of recordings based around metal they’d imagine that the sound pallet & type of sounds created would be fairly narrow- but Kay really does mange here to capture quite a wide variety of sounds & tones. We go from the low down buzzing yet piecing drone of "Kerosense Heater"(recorded in Niseko Japan), which takes in a recording of said item as it contracts with heat. Through to the circling yet detailed tonal vibrations of "Stadium Support Pillar"(recorded in Melbourne Dockland). Onto the weather gusting & rattling of "Two Storage Boxes"( recorded in Surakhani, Baku). Through to warming yet slightly creepy elector buzzing meets distant oriental advert chatter of "Street Light In Male Entertainment Distr."( recorded in downtown Sapporo). Onto to slow tumbling & rumbling metallic sound of "Dumbbell Rolling"(recorded in a Melbourne car park). Through the taut & tensioned pitter patter & back wash of "Rain On Iron Gutter"( recorded in Futako Tamagawa district of Toyko)

I’d heard one other release by Mr Kay in the past, and that was 2013 Black Mountain debut Closing In, which saw him mixing environmental field recordings, found sounds/other field recordings, with drone to electro morphed abstracted instrumentation. But this is the first purely field recordings I’ve heard from Mr Kay, and I must say I was most impressed with the range, type, and replayability of the sounds he captured here - but also the atmospheric depth is most telling with many of the recordings too. All in all another very worthy release from 3leaves.

CHAIN D.L.K
According to Martin's own words, the intention of the artist on "All Things Metal" is the highlighting of "the unique ability that metal possesses in abstracting, transforming and reconfiguring a given landscape" as well as "propelling the listener to reconsider their emotional and psychological connections to familiar urban environments". The metallic diaphragm which often becomes a sort of proper filtering by re-rendering the perception of surrounding ordinary aural inputs come from a series of installations of different kinds of microphones (contact, omni-directional air and cardioid air ones) on metallic objects or places that Martin carefully describes in the cover booklet: for instance, two contact microphones that Martin placed on a street light in Sapporo Downtown can turn footsteps, advertisements from different speakers and the buzzing noise of internal electronis of the streetlight itself into a sort of alien transmission on "Street Light in Male Entertainment Distr." or the ones he placed on the protective railing of a stairwell ("Tokyo Crows") or beneath an iron gutter ("Rain On Iron Gutter") in Futako Tamagawa or the omni-directional microphones hanging inside an abandoned Soviet oil tank in Yerevan could convey unpredictable aural experiences which can skim over psychedelia. The above-mentioned ability of metals is so abstractly extrinsic and mind-blowing in many moments of the release coming from excellent Hungarian label 3Leaves that it could be considered a proper manifestation of a false-positively hidden hyperreality.

TEXTURA
Australia-based sound artist Martin Kay's self-expressed intention for All Things Metal (200 copies) is to “highlight the unique ability that metal possesses in abstracting, transforming, and reconfiguring a given landscape—propelling the listener to reconsider their emotional and psychological connections to familiar urban environments.” The listener certainly comes away from the recording newly sensitized to how pervasive metal's presence is within our urban environments (the fact that the settings were recorded in different locales, among them Tokyo and Australia, implies a global pervasiveness, too). But more importantly, the fifty-minute recording, whose twelve pieces Kay produced over a five-year span, prompts us to reconsider how metal's sound properties can translate into listening experiences that allow us to experience physical phenomena with fresh ears; that he generally leaves the recorded audio-montages in an un-mixed and un-edited form only serves to heighten that impression. Kay, to cite one example, shows that source material as mundane as a metal wheel rolling along a concrete floor (“Dumbbell Rolling”) can turn into an engrossing vignette of spindly micro-noise.